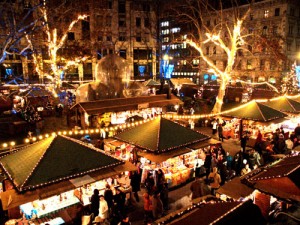 What's better than the warm atmosphere of a Christmas market, in the middle of a cold winter night?

It is nice to get lost among the stalls that offer sparkling decorations, colored garlands and the most delicious specialties!

A tradition originating from the Germanic lands that has spread throughout the continent, even in the more Mediterranean countries such as Italy and Spain. Here is some useful information to discover the joy of a Christmas market in Barcelona or Madrid!

The usual Santa Lucia Fair, the largest Christmas market in the city, starts on November 25th and ends on December 23rd. During the week the stands are open from 10:30 to 20:30, on the weekend until 21:30. The location is the splendid Plaza Nova (also known as Plaza de la Catedral), in the heart of the Gothic Quarter in front of the Cathedral of the Holy Cross. Among the stalls you will find nativity scenes, handicrafts of various kinds, ornamental plants and flowers, musical instruments ... and of course the inevitable Christmas sweets!

A picturesque Christmas market in the shadow of the Sagrada Familia, a tradition that has its origins in the 60s, will be open from 10 to 22 throughout the month of December, until Christmas.

From December 20th to January 6th, from 11am to 2am and from 17pm to 21pm, the Gran Via in Barcelona will also host its market. The right place to find costume jewelery, silverware, ceramics, home decorations, lamps, soaps and clothing… a bit of everything in short!

The Plaza Mayor market attracts tourists from all over the world and visitors from all over Spain every year. It is the largest market in the country and boasts about 150 years of history! On sale Christmas trees, decorations, nativity scenes for all tastes and all sorts of delicacies. Open from the end of November until the last day of the year from 10 to 22.


The market in Plaza de Santa Cruz is open throughout the month of December, from 10 to 22, until 23 at the weekend.

Plaza de Espana is also tinged with Christmas colors, with the 24th edition of its fair. From December 15th to January 5th you will be able to find stalls offering handicrafts of all kinds.

Cortylandia: Christmas Show… on the walls of Madrid!

add a comment of Christmas markets in Spain: Barcelona and Madrid!